I finally had a chance to run to the house and snap some pictures so I thought I'd post some here and on my Facebook page. It's kind of interesting to watch the progress, although I'm finding it more and more discouraging to go there and see all the dust and debris - plus even though they've removed most of the burned wood I still don't like the smell. I find it easier to just stay at the apartment and pretend the house is doing better than it is. :) Kind of a denial mechanism I guess.

Anyway, I thought I'd write a quick update for everyone. First is Shadow - we did find him a temporary home and he's very happy there. Some friends of ours live on an acreage and they have kids and another dog and it seems like Shadow has quickly bonded with them all. He's got terrible allergies this time of year and our friends are kind of freaking out about how badly he's scratching but I don't think there's anything we can do about it so I'm pretty sure he'll just have to stay there. Allergies are just brutal for everyone this year, aren't they?

Next, Sean: we seem to be temporarily without any UTI or other bladder issues, which is nice. Grace and I got a nasty stomach virus that didn't seem to affect Sean too much, which is even more nice, and really the only thing we've been working on lately are his warts. They're just getting ridiculously out of control, which is actually pretty common for transplant patients.

Jacob is still pretty stressed out, with all the changes of scenery and the loss of all his belongings and starting middle school and everything - that would all be stressful for anyone but then his Asperger's on top of it makes it way worse. He's coping as best as he can and we're trying to give him a little bit of a break but I think he's really just stressed out. He does like middle school though, especially since he moved up to 7th grade math. He loves having such a challenge - I don't think he's been challenged in math since maybe kindergarten! And he's riding the bus and taking trombone lessons, all kinds of new stuff.

Mark is still enjoying his new job at the reStore. He's quite a bit more comfortable now that the weather has cooled off a little and he says he's losing weight and gaining some muscle because of all the heavy lifting, which is kind of different for him. He's still applying for various office jobs but they're hinting at the reStore that they will probably make him assistant manager there after his 90-day probation so we'll have to see. I wish it paid more because he really enjoys it.

Grace and I are probably the only ones without TOO much change going on. We're at the apartment all the time now, but I'm not working yet so it's just the two of us a lot. I think as soon as we get back to the house I definitely want to work more because Grace seems so bored (she's really naughty when the boys aren't around!) but for now it's just too overwhelming for me.

And of course our house: the contractor is still saying the end of September or beginning of October before they're finished. This week the heating/cooling/plumbing guy put in brand new ductwork for a new furnace/AC unit and "rough plumbing" for a new bathroom upstairs. We'll have to pay for that stuff but it was just too hard to pass up the opportunity to do it at such a reduced price because of the renovation. Our furnace was 40 years old and we just had very inefficient window AC's and neither of them had ductwork to the upstairs so we decided to bite the bullet and just go ahead and replace it all now (we figured with our luck if we passed up this opportunity, that old furance would definitely clunk out on us like two weeks after we moved back in!) And the bathroom is definitely a luxury but again, hard to pass up at a fraction of the usual cost. We told him to let us do as much as is possible because Mark can always get furnishings and supplies from the reStore, so I don't think it will be completely ready by the time we move in but that's okay.

I posted more pictures on my facebook page but I thought I'd share a few here too. Thanks for reading and have a great day!

Yea! We have Internet again! :) No phone yet but that's okay.

I wanted to ask again for your prayers for Sean. With all the fire stuff going on, I've not had time to post about him very much and he's actually not doing real hot right now. I was kind of surprised that it took a few days for him to start feeling better with the new antibiotics but I think he's finally healing a little bit. I still haven't heard from the University about what kind of bug it was so hopefully I find that out this afternoon and I can talk to his urologist again about what's going on with all this stuff.

The rest of us are doing pretty well, all things considered. Jacob will probably be coming home this weekend, which Sean and Grace will love, and the construction has begun on the house so that's kind of fun to watch. I took pictures from the first day and they've already filled two dumpsters with all the destruction so we're kind of excited that they've started. If you haven't yet, check out my Facebook page (just search for my name) and see all the pictures.

There is one thing Mark and I are still working on and that is finding a temporary home for Shadow, our dog. If you or anyone you know might be interested in letting him stay with you for a few weeks, please let me know ASAP. Right now he's spending the nights at the house all by himself and then we tie him up in a friend's backyard, but it's pretty stressful for him. He really needs a more consistent place to live for a bit. He's really nice! :) And he's used to lots of kids being around and other dogs/cats are no problem. The friend he's staying with already has 2 dogs and 3 cats and he doesn't bother them at all.

Anyway, I'm sure Grace will be awake soon here so I'd better go. Have a fantastic day!

Hi all! I'm on my sister's ANCIENT and painfully slow computer so I'm not going to type much, but I wanted to let y'all know that Sean is still really struggling with a nasty UTI. We were at the U on Friday and they said his urine was clear but by Monday he was feverish and lethargic and he even threw up, which he never does anymore. So we headed up to his pediatrician and they said his urine looks all wonky again. I'm really getting very frustrated with that and I appreciate your prayers in that department.

As for the communication problems, I just wanted to let everyone know we don't have phone or Internet so don't be offended if we take a few days to get back to you! We should get Internet back on Thursday and then phone next Monday. 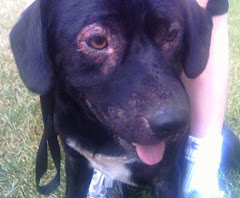 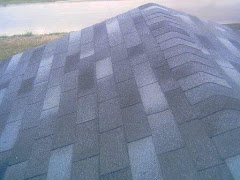 The roof looks awesome! Now we'll have to paint the house to match the shingles. 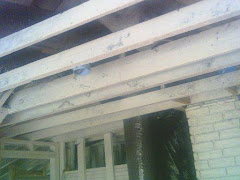 This is one of the rooms upstairs that was destroyed in the fire. We decided to put in a new furnace so now there are ducts going up to the second floor for the kids.